Singapore is better - says my son 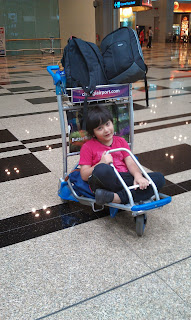 My son is eight. When he was about five we relocated back to India from Singapore. Back then I had no clue that I would have to  play tug  - of - war with my little son, every other day, in order to make him see that India is as beautiful and has as much to offer as Singapore or any other country in the world. Whenever possible, I would duly highlight all the good things about our motherland. But very rarely something impressed him about his country of birth. Moreover, he would make sure to attract my attention to the things which were unremarkable or poor in his opinion about India. The episode I'm about to briefly share is just one of the several such occasions when he tried to make his point that Singapore is better than India. This particular conversation took place in the morning a few days ago  while we were waiting for the school bus and he saw a man spitting on the other side of the road -
LV: ‘Mumma why do people spit on the roads and every other possible place here?’

Me: ‘I guess those who do it have not been taught by their parents that spitting on the road is a bad habit and spoils their own environment.’

LV (Not wanting to end the topic so easily): 'But Mumma no one spits on the road in Singapore.'

Me (knowing well where the conversation was heading but still wanting to respond to him): ‘Yes, because they know it is wrong.’

LV: ‘…and they also know that they would be fined heavily for it, if caught.’ That is another reason I like Singapore so much. It is cleaner,' he ended giving me one of his I've - won  - this - round,  smiles.

I didn't have much to say to that. One can't really argue with a child. Especially when the child has made his point well.  However, what I'm trying to emphasize here is that it's almost four years since we've shifted to India and yet my son relates to Singapore more. And I don't think it is so because he has any special feelings towards the Island country where he spent just a part of his childhood.

My son’s unfavourable outlook towards his own country is nothing new. As a concerned citizen I have myself often mulled over this fact. In fact, many of the youngsters I know or interact with feel the same way as my son. They relate to western ideas more easily than valuing their own country and it's ways. What is it that makes today’s youth and even children shun their Indian identities. And who is to be blamed for this state of affairs?  All of us!  I think. There are some basic but vital areas which are woefully neglected. Cleanliness is definitely one of them.

But this was not always so. India has always been a spiritual land. Our ancestors were very aware of the importance of overall hygiene and cleanliness in maintaining a healthy society. And they earnestly worked towards keeping their surrounding especially their houses clean.  In fact,  I remember as children we were never allowed to bring our shoes inside the house. Kitchen was off limits to outside guests unless they had bathed and changed to fresh set of clothes. In fact, most Indians try to keep their houses  clean even now. Many of the old traditions and rules are still followed in order to keep the house dirt and pollution free.

But what happens to our sense of cleanliness as soon as we step out of our houses? Why this utter disregard for public property? I rarely get to see a clean public toilet that is in usable state (unless they are located in big shopping malls). I have yet to come across a betel or gutka eater who uses the dustbin to spit instead of the walls, building corners or roads.  And I have yet to come across a shopkeeper or a street - side vendor who firmly tells his customers  to throw the garbage in the dustbin. In fact, I've rarely seen dustbins that have been placed at the right spots, look clean and not already overflowing with garbage. The state of even some of the so - called posh markets is the same: Dirt, filth and unbearable stench.

Why do we ignore such pathetic conditions? Why do we all become mute observers while people spit  out paan and gutka right in front of us without any regard? Why can’t we check an errant child who is littering the public park with empty packets of potato wafers et al? Why do we have a casual outlook towards such a basic and vital issue despite being aware? We really cannot expect our children to feel proud of their nation when we, the adult members of the society lack (or ignore), even the basic civic  commitments and behaviour. It's not late even now.
I'll do my bit. Will you?