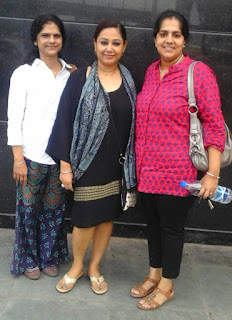 PINK COMES WITH BLACK AND WHITE

PINK is a breakaway film. But not because there’s anything new about the subject it deals with. In fact, there have been several noteworthy films made in the past on the issues and challenges faced by women living in a predominantly patriarchal society such as ours. For instance, Meenakshi Sheshadari’s career best performance film, Damini, where a woman stands against a crime she witnesses and despite the odds, bravely confronts the society (including her own family) and wins in the end. Of course, in her fight for justice she’s amply supported by an upright lawyer (one of the several striking similarities between Damini and  PINK).

Another such movie was Kya Kehna, which highlighted the issue of pre - marital pregnancy and how a young teenager refuses to abort her child despite being shunned by the society; defying stereotypical mind-sets, and with the support of her family (which too had initially turned against her) and a childhood friend decides to raise the child herself while at the same time complete her education which she'd to leave mid - way due to her pregnancy and its repercussions on her life. Again, Preity Zinta’s performance in the movie was outstanding and earned her several awards.

And yet, PINK has not only dared to break the glass ceiling but has also made us, the viewers, to sit up and take note; and even cry out loud in angst as the shards hit us in the eye and other parts of the body injuring us and leaving us feeling uneasy.

Apart from the brilliant acting of almost everyone in the film, the taught narration, the suspense, and the acute depiction of the collective trauma of the three women friends that many of us can relate to; the movie raises certain pertinent questions (which have also been pointedly raised in all the previous female – centric movies). Some of them being,

Why do we have a different set of rules for men and women?
Why do we judge the character of a woman based on the kind of clothes she wears, the places she visits, the way she smiles, talks or behaves et al?
And finally, what happens to a woman when she says enough is enough and decides to fight back?

However, PINK successfully manages to hold our attention with its fresh take on the aged discussion on women’s rights and the factors limiting them. But what really makes it radically different than those other films, is the way it nudges us away from the main problem or issue being highlighted in the film without digressing and yet compels us to take note of the seemingly inconsequential matters presented in the film and give them a serious thought.

Let me give you a few instances from the film without (hopefully) giving away the whole story:

1.    After the altercation between Rajveer; the nephew of a powerful politician, and Minal; a girl he meets at a rock concert, leaves him seriously injured, he is rushed to a hospital by two of his male friends. Later, the entire incident is narrated to Ankit (the misogynist friend, of Rajveer) by the two friends who were also present at the resort, when the incident took place. Ankit’s strong reaction to the whole affair even though he had no role to play in it, leaves us flummoxed.

Ankit not only compels Rajveer to teach the girls a lesson but also gets involved himself to avenge the insult.  This feudal mind-set is so prevalent in the mentality of the Indian male that after a while we don’t find it odd, when the former willingly becomes a part of it all to cause further damage to the girls.

2.    Deepak Sehgal (Amitabh Bachchan), a retired lawyer, visits the traumatised friends of Minal (who has been wrongly accused and put behind bars), asks them for the original copy of the FIR they had lodged with the police, reads it out loud, clarifies the legal points before finally letting the anxious girls know that Minal’s bail application date has been intentionally moved to Friday to prevent her release from the jail for at least a couple of days.

But before he leaves, he enlightens them that unlike in other cases, women and minors can be granted a bail even on a Friday.  This little nugget of information that he shares so offhandedly with the girls makes one realise how important it is for a woman to be aware of  her basic legal rights. It might not only save her from being tormented by the authorities but also help in taking the right course of action.

3.    Then there’s a point, during the court trial, when Rajveer is called by the prosecuter to take the stand for questioning. Deepak Sehgal, who has been keenly observing Rajveer all this while, raises an objection and draws everyone’s attention (using sarcasm and humour effectively) to the fact that the former’s hand is inside the pocket of his trousers while he’s on the witness stand in a courtroom. With this simple statement, the witty lawyer again manages to draw everyone’s attention to the complainant’s real character and his unmerited and inappropriate sense of entitlement.

I can give several other such small yet powerful instances from the film to show how beautifully the story weaves these often ignored or neglected aspects of our personal values, beliefs and social attitudes into the main narrative to drive home the point that as individuals, parents and as a society we have to break away from the decaying patriarchal culture and make  great many self - corrections in the way we see things; in the way we act and behave towards others (especially women); and most importantly, in the way we raise our children.

To begin with, let’s teach our boys to respect a girl's wishes and boundaries from a young age. Let's make it a point to share these powerful lines from Deepak Sehgal's closing argument with them,

‘When a woman says NO, it means you stop.’

Posted by Sujata at 1:29 PM No comments: