Excerpts from a short story - 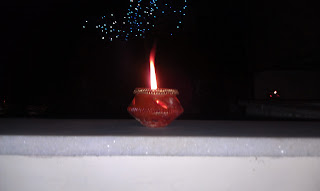 ‘Would you care to listen?’ Her large expressive eyes pleaded with me.

‘But I don’t have that much time,’ I responded impatiently ignoring her sad looks.

‘Oh! Well then let’s get on with it.’ She looked away, her earnest gaze shifted slightly to look beyond me at the chipped dirty walls of her room. Then slowly, as if in a trance, she removed her clothes.

I had never felt as selfish in my life as I did at that moment.

Afterwards, while I sat on her bed and smoked the last cigarette of the day, she made herself busy trying to tidy up up her run- down room. Not that she could do much about it. I noticed distractedly.

Located in one of the most notorious and neglected areas of the city, the one bedroom asbestos sheet house was somehow kept together, as if by sheer will- power.

‘How long have you lived here?’ I asked looking at her slim back.

‘Huh? Oh! Well…since I came to the city,’ she replied, folding her clothes kept in a bundle in a corner.

‘You don’t belong to Chandigarh?’ I don’t know what prompted me to converse with her. A part of me just wanted to leave.

‘No. I was brought here five years ago,’ she whispered.

‘Wow! That’s a long time.’ Mentally, I quickly tried guessing her current age. She looked about nineteen. And if so, she must have not been more than thirteen or fourteen.

‘Yes,’ she said, giving me one her enigmatic smiles that attracted me to her the first time.

‘Hmm. Do you still want to tell me your story?’

‘If you have the time to listen to it? Lilly told me you are a writer. Maybe you will like my story and write about it,’ she answered in a hopeful voice.

‘So how would that help you?’

‘It will. I will feel happy. Besides, it may help some other girl…you know…,’ she left the words hanging mid -way.

‘Hmm.’ I nodded not really wanting her to elaborate and not at all sure whether I should stay to listen to her story. Yet I was curious about her.

For one, she looked unlike the others I was used to. In fact she kept herself so simple that I had totally failed to notice her until she had herself hesitantly approached me. It was only then that I actually took note of her. And even though she was dressed simply in a white tee over a faded printed skirt and and wore no make - up she looked attractive. Very attractive. In fact, if I had seen her somewhere else I would have mistaken her for one of those uptown giggly college girls I crossed every day while on my way to work.

'So you will stay?' She asked, meeting me in the eye.

Her eagerly hopeful voice somehow stopped me from leaving.

'I have about a couple of hours before I have to report for work. I guess I can go directly to office from here. But don’t take too long. Okay?’ I inquired seriously.

'Really?? Oh…thank you so much!' Her eyes lit up. It pleased me to see her happy but instead of sharing her smile I maintained my aloof stance and replied,

'Hey! I said I will listen. Nothing more to it.'

'Yes. I know. That's enough,' she said giving me the same enigmatic smile I was growing used to. 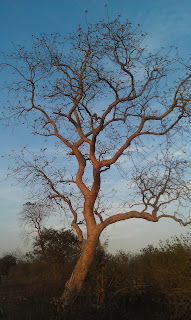 
The first question that needs answering is, why a bird’s -eye view?

Well, the answer is quite simple; I read the book more as a reader and than a reviewer even though I was approached to review it. As many of you are already aware I seldom review books. As a writer myself I don’t think it’s in my place to critically analyze and evaluate a book. However, I do like to share my humble thoughts on the books that I read and like.

Of course, I must also admit that due to my other preoccupations I have been unable to do so for the past several months now. Anyway, coming to the subject at hand, at times debut authors or other friends have approached me to do a book review and instead of refusing them I let them know my only condition: I will write a bird’s – eye view only. And that’s what I conveyed to Vijay also who's connected with me on FB and is a good friend of the author.

Now Vijay had a typical problem at hand; his best friend, Rajeshwari Chauhan wrote this book after much research and got it published in 2006. However, the book despite its very interesting and different take on the popular love story of Emperor Akbar and his Hindu queen Jodha bai, did not get the  visibility due to it. The author was understandably disheartened. Vijay being a good friend wanted to help (he had also read the book and saw its potential). Recently, he approached me with a request to read the book.

When I first heard about the theme and the experimental narration style I was intrigued. I asked Vijay to send the book to me and promised him that if I liked it I would not only write about it but also send the book for a formal review to a few other avid bloggers and reviewers. Vijay agreed and promptly sent me five copies of the book. I completed the book just a few days ago. Without further ado let me share my thoughts on the book as a reader …

To tell you frankly, when the book arrived I thought it would take me some time to finish reading it. There were a few reasons for that: firstly, the book cover gave the impression that it might be a serious read and may require careful attention to details. Secondly, while browsing through the first few pages and noticing the mixed language, (the language of the story alternates between English, Hindi, and Urdu), I thought it might be a tedious job and lastly the story is divided into short scenes, like a script of a movie or a play which again did not have a favorable first impression on me.

But then as they say never judge a book by its cover.

Without exaggeration I think I got hooked to the story from almost the very beginning. There are  two stories running parallel swaying between two different time periods; ancient and modern age and deals with the subject of love, loss and longing beautifully. The characterization is vivid and powerful; if the female protagonist of the modern period, Mrinalini is portrayed as someone mischievous, attractive, good-hearted and adventurous, Jodha Bai’s character is successfully brought out as someone who is exquisitely beautiful, artistic, honest, mature, headstrong and sacrificing.  Also, even though it’s out and out a book for die - hard romantics, the elements of humour, wit and suspense makes it spicy and increases its appeal to readers who enjoy a good book. The research work of the author to get the facts right is visible. The author shares her perspective (based on facts), about the various historic battles fought by Akbar. She also reflects upon the plight of royal women who spent their entire lives in the harems and successfully contrasts it with that of present day women who are independent and much more vocal in expressing their thoughts and desires.

However, a few things that distracted me in – between were the loose editing, author’s experiment with the mixed language and the style of narration. Rajeshwari Chauhan was well aware that the style and form of her book was much different than the regular novels and thus as a forethought disclosed a bit about it in the blurb – “I have made an effort to turn this book into a cinema screen. Hope you will visualize my narration and share the joy I felt while creating it.”

Overall, I think the book has an engaging story to tell in a most interesting way. If you ask me as a reader...I will say- it's a good read!

Posted by Sujata at 3:34 AM No comments: